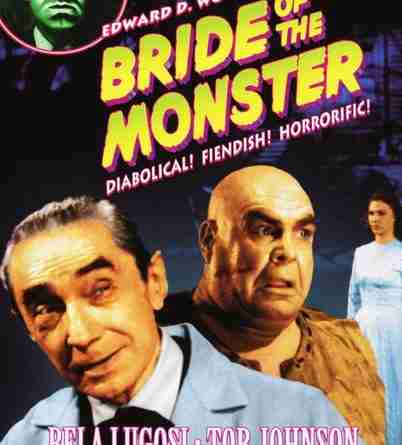 And now for one of the major influencers of Space Zombies: 13 Months of Brain-Spinning Mayhem!, my own silly shlock fest…a couple films by the late, great Edward D. Wood Jr., the reigning king of fun bad movies (as is Tommy Wiseau, but his movie, The Room, is a different kind of horror movie altogether).

Bride of the Monster, 1955–this was Ed Wood’s biggest budget film at $70,000.  Its sequel, Night of the Ghouls, was not released until 1984, due to last minute financial issues.  This is a movie that combines genres, something I appreciate immensely, in this case science-fiction and horror (and a third, unintentional genre…comedy).  Tor Johnson flexes his lack of acting muscles as the titular Monster.  Tor, professional wrestler and eternal human edifice, did not require acting ability to convey a hulking beast.  Bela Lugosi, however, is still a master of the hand gesture, even in his elderly, arthritic years.

Plan 9 From Outer Space, 1959:  Written, produced, directed and edited (as per usual) by Ed Wood.  Posthumously starring Bela Lugosi in random footage shot by Wood before the actor’s death.  Again, Ed combines the sci-fi and horror genres with both ghouls AND aliens.  As described on Wikipedia:  “Plan 9 from Outer Space played on television in relative obscurity until 1980, when authors Harry Medved and Michael Medved dubbed it the “worst film ever made” in their book The Golden Turkey Awards. Wood and his film were posthumously given two Golden Turkey Awards for Worst Director Ever and Worst Film.