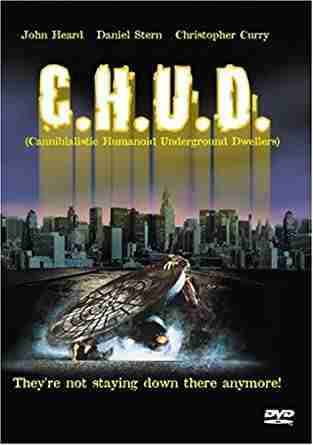 When the film opens, a woman, Flora Bosch (Laure Mattos, real-life wife of co-star Daniel Stern), walks her Westie down a gritty New York street. As she passes a manhole, a creature drags her and the dog into the sewers.

George Cooper (John Heard), once famous fashion photographer, now watches and photographs the homeless (so, so many—and they’re absolutely EVERYWHERE) wandering and wallowing among the gross mess that is NY in the early 80s—particularly those known as “undergrounders” who live in the sewers and subway tunnels. They bring a tear to his eye…aw…more on this later with respect to an article in Vanity Fair about the movie Us, much influenced by C.H.U.D.

Side note…George lives with his girlfriend Lauren—there’s a brief discussion about whether or not Lauren should have their baby—it’s her body, her career (modelling), her choice, says George. Very interesting moment for the times—1984 and 2022…yikes.

NYPD Captain Bosch’s wife was the woman in the opening scene of the film—Flora Bosch, so he is super motivated to figure out what’s up with all the missing people in his precinct. He interviews A.J. “The Reverend” Shepherd (Daniel Stern), who runs the local homeless shelter, who thinks the recent events are part of a massive government cover-up, natch. But he actually has the evidence to prove it—surprise, surprise. People in high places know more than they are letting on, including Wilson, who works for the Nuclear Regulatory Commission. So, we’re definitely also covering 80s nuclear anxiety in this film.

It seems that the monsters lurking beneath the streets and making people go poof (especially undergrounders) were once human, but have been mutated by radioactive, chemical toxic waste into “cannibalistic humanoid underground dwellers” (as is supposedly the reason for the acronym).

A.J. and George eventually meet and discover that the Nuclear Regulatory Commission is directly involved—it has been secretly hiding waste by-products of toxic waste (marked as contamination hazard urban disposal…aha! The real acronym!) beneath Manhattan in abandoned subway tunnels. When undergrounders have come into contact with the by-products, they’ve turned into the mutated creatures. To protect the secret, Wilson plans to seal the sewers, open up the gas lines and asphyxiate the C.H.U.D.s and witnesses in spite of the obvious danger to the city.

Meanwhile, Lauren is attacked by a mutant and narrowly escapes.
At a diner, two police officers (John Goodman and Jay Thomas of Cheers!) and a waitress are killed by C.H.U.D.s, finally drawing a police presence and the public’s attention. George and A.J. find a camera set left behind by a killed NRC cameraman and use it to report their findings to Captain Bosch. Wilson later shoots Bosch in a mad attempt to continue the cover-up, just as the Captain is helping A.J. and George escape from a manhole. Wilson then tries to run George and A.J. over with a truck, but poetic justice reins when A.J. shoots Wilson with Bosch’s gun, and the truck explodes spectactularly (read: unrealistically) as it drives into the manhole.
Light, fun horror with subtext, with a desire to bring societal issues to the surface of people’s minds, despite the ridiculous idea of C.H.U.D.s. An interesting blend—or clash—of serious ideas with B-movie fun. Are the grimy-looking people the grimy ones…or are the ones who look “clean”? Really, everyone is grimy—some look grimy (the homeless) and some just feel grimy (Wilson and other authorities involved in the cover-up). Makes you think. 😉
What I want to know is how come everyone in this film has really easy basement access to the sewers? Lauren is wondering what’s up and she goes into the basement of her building and finds Bosch’s wife’s dog (just as he and other cops find his wife, who washes up in the river).
And does Lauren’s use of a coat hanger to unclog her shower drain (which results in a blast of blood all over her) parallel the whole abortion discussion she had with George earlier? If that was the intention…not subtle. 😂
Another question—does being a C.H.U.D. also have a zombie kind of side-effect? I noticed that Victor, George’s sick, homeless friend was bitten by a C.H.U.D. before becoming a C.H.U.D. himself. Is this not only radioactive mutation, but also contagion? Perhaps I need to see C.H.U.D. II: Bud the C.H.U.D. (1989) for more answers.

All fun and games aside, there’s a real empathy for the homeless here, particularly through the characters George and A.J. This influenced and was further explored by the more recent film, Us, by Jordan Peele. As I mentioned off the top, there’s an interesting article in Vanity Fair on the tie-in between Us and C.H.U.D. Here’s a snippet (spoilers for Us):

“…C.H.U.D., in which New York City’s homeless are dragged into sewers and consumed by humans mutated into monsters by nuclear waste, came out in 1984, the year Ronald Reagan was re-elected on the promise of “It’s morning again in America.” C.H.U.D. rejects that vision in its very premise, focusing on the homeless—many of them Vietnam veterans—at the same time that Reagan was [making homelessness worse (http://www.sfweekly.com/news/the-great-eliminator-how-ronald-reagan-made-homelessness-permanent/) by cutting spending on housing and care for the mentally ill. Two years later came Hands Across America, in which even Reagan participated, a perfect gesture for the time: a show of empathy for the homeless that did more to comfort the comfortable than actually benefit those in need.

Hands Across America, as has been widely discussed, is essential to understanding Us. But homelessness is a key part of the film in other ways, from the man holding the Jeremiah 11:11 sign—the first victim of the Tethered uprising—to Red, the double for Lupita Nyong’o’s Adelaide who, as the film’s final twist revealed, was also robbed of her home. That twist marks another connection back to C.H.U.D., in which the film’s true villain is revealed to be a government functionary named Wilson. The name of the family at the center of Us? Wilson.

The presence of the C.H.U.D. videotape box in the very first scene of Us turns out to contain the two biggest secrets of the film: there are monsters living in tunnels under the earth, ready to kill human beings, and the movie’s protagonist, Adelaide Wilson, is, like her namesake, actually a villain…”

And finally, some tidbits from Wikipedia:
“C.H.U.D. was given a limited release theatrically by New World Pictures beginning in August 1984. The film opened at #13 at the box office, grossing $1,762,922 with an average gross of $5,686 in 310 theaters…
C.H.U.D. was released for home video on Betamax and VHS by Media Home Entertainment in 1984.[6] The film was released on DVD by Anchor Bay Entertainment on January 30, 2001…A new one disc Blu-ray was released on November 9, 2021…
Rotten Tomatoes, a review aggregator, reports a 29% approval rating based on 14 reviews; the average rating is 3.89/10.
A sequel, C.H.U.D. II: Bud the C.H.U.D., was released in 1989.[16] Although C.H.U.D. was negatively received during its initial release, it attracted a cult following over the years…and references to it have appeared in The Simpsons,[19] The CW‘s The Flash, Aqua Teen Hunger Force, Clerks II, Castle, Archer, Outer Banks, Agents of S.H.I.E.L.D., and Rick and Morty…In 2007, Rob Zombie was rumored to be considering a remake,[23] and, in 2008, a different remake was rumored to be in production…The found footage horror film Dwellers has been publicly referenced by its writer and director Drew Fortier as being heavily influenced by C.H.U.D…The anthology C.H.U.D. LIVES!: A Tribute Anthology, edited by Joe Mynhardt, was released in 2018…” 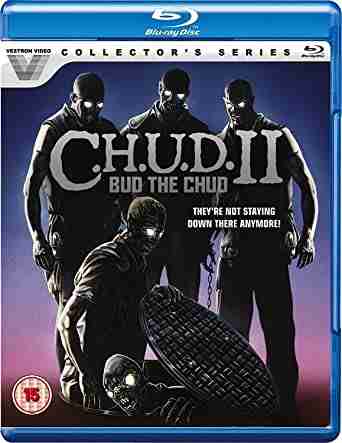