In this fun, Roger and Julie Corman produced 80s B-movie, a group of young shopping mall employees have an after-hours party in one of the stores. After the mall goes on lock-down and before they can get out, the robot security system boots up, malfunctions (due to lightning strike), and goes on a killing spree, just as any put-out, put-upon robot security system should. 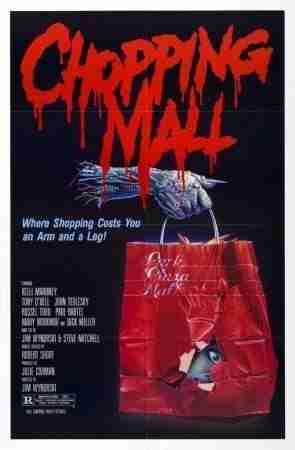 Julie Corman had a deal with Vestron to make a horror film that took place in a mall. Jim Wynorski agreed to write one cheaply if he could direct.

Wynorski wrote the script with Steve Mitchell, whom he had known since the 1970s, when they met at conventions for EC Comics, and became friends. They decided to do a “phantom of the mall“-type movie and Mitchell says it was Wynorski’s idea to feature robots.[1] Wynorski said he was inspired by the 1954 film Gog; he claims he never saw the 1973 TV film Trapped, which some believe inspired Chopping Mall.[2][3]

Mitchell says they wrote up the story in 24 hours and sent it to Julie Corman. Vestron gave their approval within a week despite lack of a script. The script took around four or five weeks to write.[1]

Wynorski says Roger Corman “was nothing but supportive from the get-go. He loved the idea.”[4]

The film was written to be filmed at the Beverly Center Shopping Center, but they charged too much money, so the film was shot mostly at Sherman Oaks Galleria, where Fast Times at Ridgemont High and Commando had been filmed. The Beverly Center was used for some exteriors.[1]

Wynorski says that Bartel and Woronov ad-libbed the bulk of their parts.[5]

At least two different versions of the film exist. The TV cut has some extra footage, such as a small homage to Attack of the Crab Monsters, extended scenes of Ferdy and Allison watching TV, some aerial shots, and an extension of one of the Ferdy/Allison scenes. No official source offers this version … 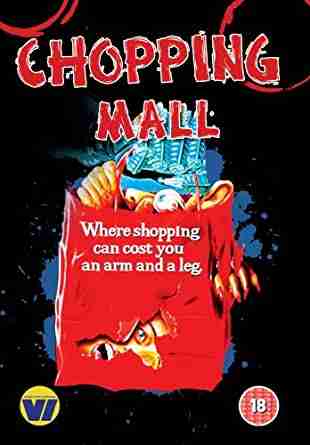 Random bits of trivia, errors, and other nonsense...

The budget for the film was very limited (around $800,000 total) but the director had no problems with this, as he was happy to work on a Roger Corman film and knew beforehand that Corman always kept expenses to a minimum.

The pet shop where Alison hides from the robots is called Roger’s Little Shop of Pets, a reference to Roger Corman‘s The Little Shop of Horrors (1960).

The whole film was shot in twenty-two days.

The inciting moment that kicks off the action is identical to Short Circuit (1986), which is a robot getting struck by lightning. However, the results are exactly opposite. In “Short Circuit,” a killer military robot becomes a sweetheart, whereas in “Chopping Mall” good security robots become killers.

The wall of the restaurant within the mall where two of the characters work is decorated entirely with movie posters of other films released by Roger Corman.

In November 2011, Dry County Entertainment acquired the film rights and is planning a remake with a supernatural twist. The film will be produced and written by Kevin Bocarde and directed by Robert Hall.[6] As of January 2021, nothing has materialized.