Regan Macaulay2021-10-26T19:27:28-04:00
By Regan Macaulay Uncategorized Comments Off on Day 6 of my 13 Horrifically Silly Days of Halloween with my guest Kirk Havilland, Programmer from the Blood in the Snow Film Festival 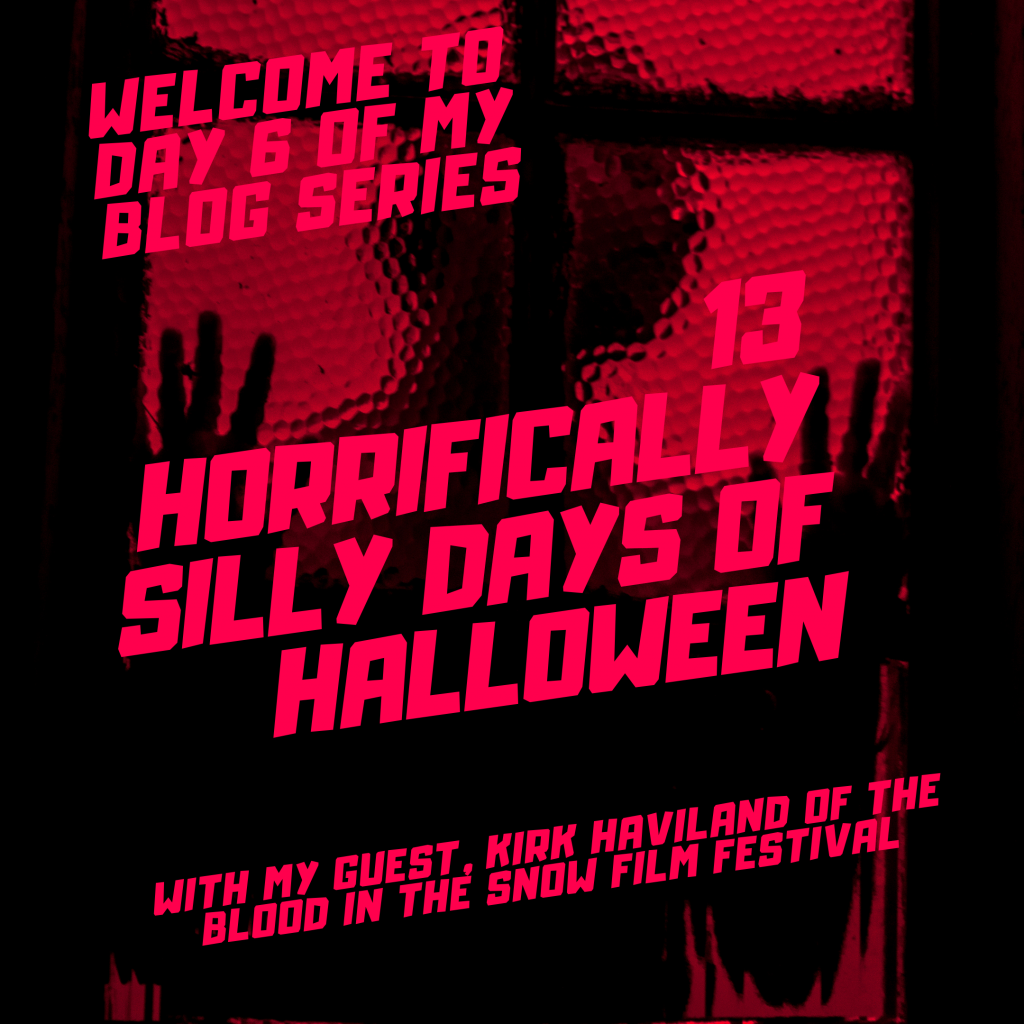 The Blood in the Snow Film Festival Line-up for 2021:

EDMONTON/TORONTO (October 5, 2021) – Super Channel and Blood in the Snow Film Festival (BITS), a unique and imaginative showcase of contemporary Canadian horror films, are pleased to announce that they have joined forces once again to bring a hybrid edition of the upcoming 2021 BITS to Canadian horror film fans across the nation.

This year’s festival is sure to shock and delight horror lovers with the virtual portion running on Super Channel Fuse over Halloween weekend from Friday, Oct 29 – Sunday Oct 31, and the in-person festival returning to the Royal Cinema November 18 to 23.

“We are proud to be partnering once again with Kelly and the incredible team at BITS to bring another round of exceptional Canadian horror films to our viewers,” said Don McDonald, President & CEO, Super Channel. “The virtual edition is a great way to introduce these films to Super Channel’s national audience and perfectly timed for horror fans over the Halloween weekend.”

“This has been a fantastic experience working with Super Channel. I can’t think of another broadcaster that has championed Canadian independent genre cinema like they have,” adds Kelly Michael Stewart, Festival Director and Founder of Blood in the Snow. “Last year we were able to take over the TV airwaves with the biggest Halloween party across Canada, and we look forward to doing it again.”

The Blood in the Snow Film Festival presented by Super Channel will showcase five harrowing horror features and a variety of hair-raising shorts programs across three nights of terror-ific programming. In addition to exclusive Canadian film premieres, the virtual film festival experience will include pre-recorded film intros and Q&A’s with filmmakers.

Below is the BITS lineup of features and shorts programs scheduled to air on Super Channel Fuse: 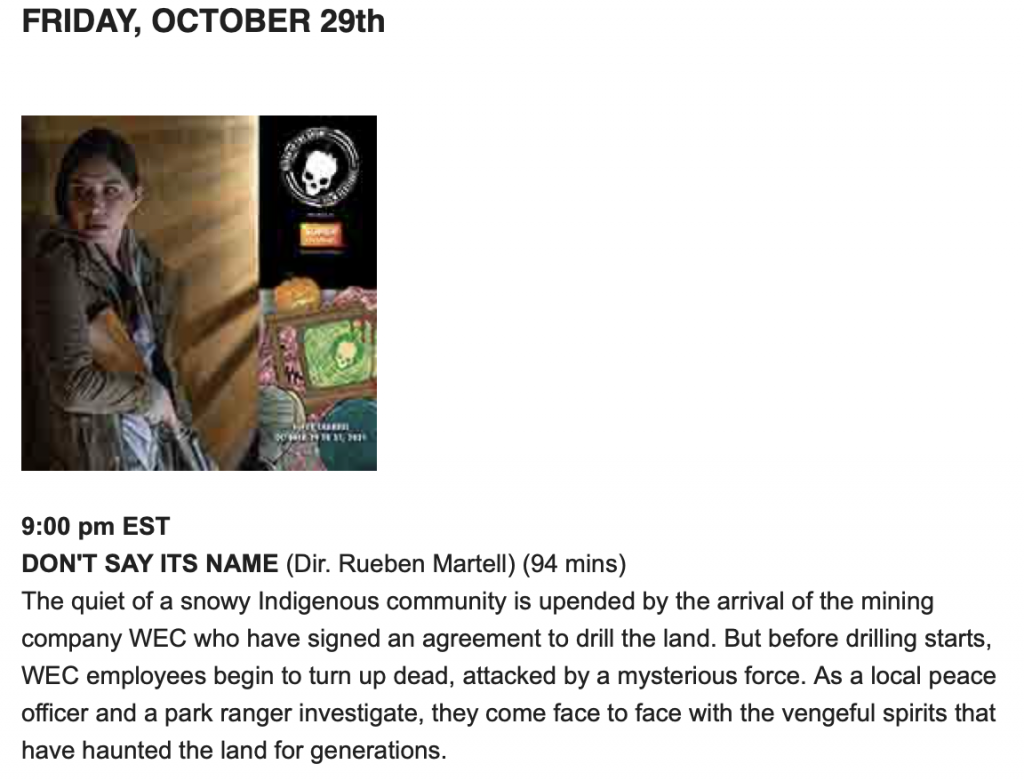 The quiet of a snowy Indigenous community is upended by the arrival of the mining company WEC who have signed an agreement to drill the land. But before drilling starts, WEC employees begin to turn up dead, attacked by a mysterious force. As a local peace officer and a park ranger investigate, they come face to face with the vengeful spirits that have haunted the land for generations.

11 pm ET – Mournful Mediums – Not too short, not too long! New for 2021, a shorts film program of the best in Canadian medium length shorts.

Single mom Kate will do anything to protect her daughter Beth from a dark and disturbing past that haunts them both. They have started a new life in an isolated farmhouse in the middle of the woods, far from the prying eyes of other people. Over the course of one day, Kate begins to suspect that something sinister is happening around them. As the danger becomes clear, Kate’s motherly instincts are put to the test. How far will she go to protect her daughter?

Opening with the short films The Child With No Name (director Chad Costen) and We All Dream(director Daniel Stark).

A burdened man feels the wrath of a vengeful God after he and his wife are visited by a mysterious stranger.

When eight celebrities from around the globe are invited to compete in an online reality show, they soon realize that they are playing for their very lives as those voted off suffer horrific consequences, broadcast live to the entire world.

Opening with the short film That Halloween (director Mike Hickey).

As the world enters quarantine, a front-line parasitologist is imprisoned in a life-suspension chamber. To escape she must destroy the last of her kind.

Films and scheduling details for the in-person festival and Deadly Exposure industry events will be announced at a later date.

And now...the in-person schedule November 18 – 23 at the Royal Cinema.! Look for an updated and separate blog post on this in November, too:

Joel, a caustic 1980’s film critic for a national horror magazine, finds himself unwittingly trapped in a self-help group for serial killers. With no other choice, Joel attempts to blend in with his homicidal surroundings or risk becoming the next victim.

6:45pm – Funny Frights (87 mins) – A collection of premieres of Canadian genre shorts that look on the “lighter” side of horror.

During a pandemic, a pregnant restaurateur tries to rob a priceless truffle from a reclusive veteran.

6:45pm – Dark Visions (100 mins) – A collection of the darkest, scariest, moodiest and the most intense Canadian short films playing this year.

Nash Caruthers is on a deadly collision course with the people that tore his world apart…along with something unexpected. Something far more sinister.

6:45 pm – Emerging Screams – A collection of short films from brilliant first-time directors and the most promising student filmmakers in Canadian horror.

A mystical horror-thriller where reincarnation, demons and sorceresses intertwine to tell the story of a spiritual search gone wrong. A psychology student delves into her sister’s psychosis, exposing herself to an ancient predator who hunts souls.

A man living alone in the deep woods finds Emily, a hiker, unconscious and laying on the forest floor. He brings her back to his home and helps her get back to health so she can leave the forest and get home. After a few tense days coexisting, Emily makes a discovery. She finds a crudely built shed behind the man’s home. When she opens it, she unleashes something truly haunting. As Emily and the man come to terms with what has been released, they also attempt to find a way out of the forest which isn’t exactly what it seems.

On an isolated farm in what appears to be the 1800s, a family is led by their tyrannical father who preaches fire and brimstone and their devout mother who preaches obedience. They live in fear of a higher power and an existential threat living beyond their farm. Promising eternal salvation and protection against these outside forces, the father demands blind faith and back-breaking labor.

Passes and tickets are on sale now at www.bloodinthesnow.ca

Films that Kirk and I chatted about: