Did you catch Regan’s 13 Horrifically Silly Days of Halloween series?

Did you catch Regan’s 13 Horrifically Silly Days of Halloween series? 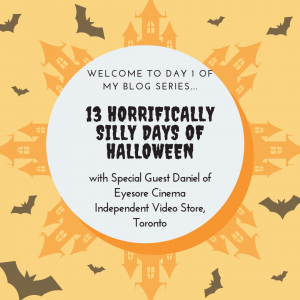 Because if you didn’t, you’re going to want to check them out, even though Halloween is over for this year.  This series and its guests can be enjoyed any time of year!

Regan begins with Daniel from Eyesore Cinema, an independent video store that stocks hard to find, less than mainstream movies (mostly in the horror or genre vein).  They also sell books, magazines and a few other items of merchandise…plus there’s an awesome cinema and event space in the back for screening the worst and most fun of B-movies, and whatever else they damn well feel like!

So, click the image above or right HERE to check out the 1st Horrifically Silly Day, featuring B-movies, cult films, unusual Frankenfiction genre books and magazines that you can find at Eyesore Cinema (including Regan’s book series, the Trilogy of Horrifically Half-baked Ham and Triple Take film Space Zombies: 13 Months of Brain-Spinning Mayhem!)