Regan Macaulay2016-10-30T00:00:00-04:00
By Regan Macaulay Uncategorized, What's New Comments Off on Hallowe’en Projects…Part 6
And now, we look at the present…and THE FUTURE of my Halloween related projects!  Horror at Terror Creek!

A slightly musical “B-Movie” play meant to be a ridiculous, tongue-in-cheek horror play that happens to have one musical number (the music for which was created by the awesome Scott McCord!  I cranked out some lyrics and he edited them for me into something somewhat sensible.)

From the introduction of the published version of the play:  The play is meant to evoke the over-the-top fear and fun of those old Vincent Price/Peter Lorre/Christopher Lee horror movies of the ‘60s and ‘70s live on stage! The play pays homage to the lively acting, strained special effects, vivid colours, Gothic set design, and far-fetched but endearing scripts that were often filmed by Roger Corman, and sometimes written by Richard Matheson. Aesthetically, when the play is produced, it should mirror Roger Corman’s Edgar Allan Poe classics (films such as Fall of the House of Usher, Masque of the Red Death, and Tomb of Ligeia). The script, and therefore this book’s inspiration is an amalgam of many different B-movie and horror film sources, including the likes of Horror Hotel, Rosemary’s Baby, and The Brotherhood of Satan. And let’s not forget the zombies. The setting is modern, but evokes a mood of a Gothic past, and a flare of the 1960s. Naturally, there is also a touch of The Rocky Horror Show, with a single musical number. Irreverent fun and the vigorous energy of classic B-movie horror films are key!

First came the play.  I wrote this in 2010 and had a private reading/workshop for it that October with yet another talented cast reading the various silly-scary roles.  Actually, a number of these actors and their previous performances in other Triple Take productions inspired a large number of these characters.  You’ll find a mad scientist, a Coven’s high priestess (with a whiff of Nurse Ratched), a melodramatically eloquent Igor-type character who attempts (emphasis on “attempts”) to speak as Poe would have written, a mute and tortured hotel maid, zombies, a disfigured science experiment with a secret, witches, a stranger in the mist (always in the mist) and several more characters on the side of good and a few more evil.

I published the play in 2013, around the time I was publishing other plays and movie scripts of previous Triple Take productions.  I recently decided to create a prose version of this story, just like I had for Space Zombies! and then They Suck.  Together, these three works will be my Trilogy of the Horrifically Half-Baked Ham.  Or something.

Like They Suck, Horror at Terror Creek will include some illustrations, mainly of the characters in the book (and play), but also general demonic stuff.  You know. 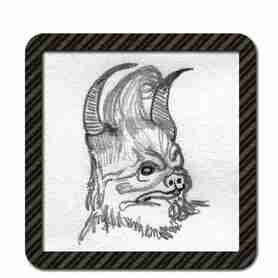 I’m not even sure what that thing is. But I like his hair-poof. It really sets off his horns.
For now, you will have to be content with the play version, which you can find HERE.

You can listen to Horror at Terror Creek’s single musical number, Scott McCord’s Christopher’s Turn, on Triple Take’s news page (the podcast player on the right side).  It’s excellent!  I do hope I get the chance to produce and direct this play someday, as that number really needs to be performed live.

I’m hoping that next Hallowe’en, the novella will be available for purchase and this absurd little trilogy will be complete!