We continue on with memories from many members of Triple Take Productions…today, Allison McWood…

Allison: The one memory that stands out for me was how a prop from It Was Kit cultivated its own fan base. Stiffy the dead rat was used as a comedic device in the script, but somehow received just as many rave reviews as the actual actors did. It was like the stuffed rat was a member of the cast. I remember my RSVP to the wrap party was, “I’ll go if Stiffy goes.”

When we were developing the script for The Aquarium, we were debating over whether or not Jesus was funny enough to make a cameo appearance in the Dundas subway scene. As it turned out, Jesus had way more followers than we anticipated! I remember people getting all star struck in the Factory Theatre courtyard when they saw Nate come out. You would hear gasps and people going, “Oh my God! It’s Jesus!” People were following him around like he was going to bless them or something. It was hilarious. 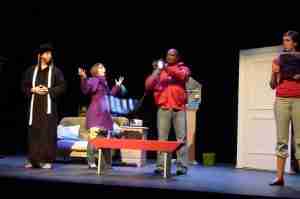 (Nate Callens is a Rabbi in the photo, but magically changes into Jesus in this scene from The Aquarium…with Kirsten Corvers, Anthony Palmer and Allison Price)