Jason: Lots of fun memories from Triple Take and one that stands out is filming the YouTube segments for the anniversary of Space Zombies. Getting together with old friends and expanding the role of The Moral Man to film these segments was a lot of fun. And it was also SO HOT! We managed to pick the hottest days of the summer to do this as I sat in a full suit under hot lights for hours. And while the room was fully air conditioned we couldn’t have it on because it was too loud to have on while we filmed! It was both a super cool and super hot experience! 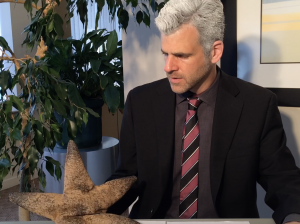 (Jason is both Moral Man/A Man of Great Importance and the operator of a Starfish puppet in this still from Moral Man’s series…a spinoff of Space Zombies!) 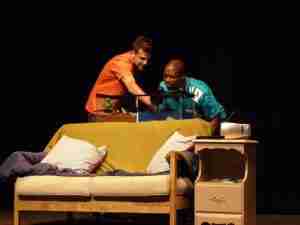 (Jason with Anthony Palmer, who starred together in The Aquarium, our 2010 Toronto Fringe show…they’re peering into their aquarium, which is actually a paludarium {look it up})