An alien experiment crash lands on earth in the year 1959 and infects a member of a fraternity. Scientists freeze the body, but in “modern day”, which would be 1986, in this case, two geeks pledging to be in the same fraternity thaw the corpse. The parasitic slugs within proceed to infect the campus, transforming their hosts into zombies…mwa ha ha ha!

Night of the Creeps is a 1986 American science fiction horror comedy film written and directed by Fred Dekker in an earnest attempt at a B-movie and homage to the genre. Nods to slasher movies and alien invasion films are included among the usual zombie tropes, and though this feature directorial debut for Dekker did not translate into success at the box office, the film has developed a cult following, which might be considered more appropriate for an homage to sci-fi/horror B-movies. 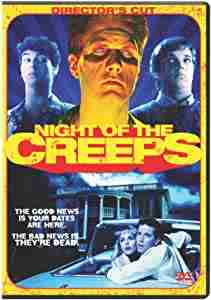 Apparently, Night of the Creeps has two different endings! From Wikipedia:

The film has two endings, one of which was used for the film’s theatrical release and the other is the ending originally intended by director Fred Dekker.

In the theatrical version, the dog who caused the bus accident returns and approaches Cynthia. As Cynthia bends down toward it, the dog opens its mouth and a slug jumps out toward her.

The original ending shows Chris and Cynthia standing in front of the burning sorority house, with the camera moving to the street where police cars race towards the burning building. The police cars race by the charred and ‘zombified’ Cameron who is shuffling down the street, still smoking a cigarette, when he suddenly stops and falls to the ground. His head then bursts open, with the slugs that incubated inside his brain scamper out and slither towards a nearby cemetery, suggesting the slugs have found new hosts to inhabit. Searchlights appear from the night sky, revealing the source to be the spaceship from the beginning of the film, with the aliens intending to retrieve their experiment. 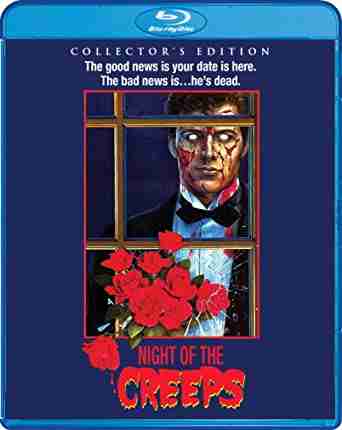 Some bits of trivia and errors in the film:

Zombie Town was marketed in some regions as a sequel, being alternatively titled Night of the Creeps 2: Zombie Town in Germany.