See the movie on amazon prime

BUY THE NOVELETTE ADAPTATION ON LULU

Space Zombies: 13 Months of Brain-Spinning Mayhem! is a feature film shot on digital video that pays homage to B-Movies of the 50s, 60s and 70s – in particular the films of Edward D. Wood Jr. Though unintentional, the idiosyncrasies, errors and basic ‘bad’ filmmaking that go into these ‘terrible’ but endearing and highly enjoyable films, has created a style and a cult following.  It was my desire to delve deeper into this style and accidental technique through the making of a parody film that emulates B-Movies down to the last detail, but within a modern context, as if created today.  The result is a hilarious film study, both entertaining and enlightening.  There is a definite art to creating something ‘bad’, particularly if you are doing it on purpose!

Even the sanest and kindest of men goes mad.  But what is it that drives him to insanity?  What you are about to see are the images of the circumstances under which one man, veterinarian Dr. Vic McNaughton, goes horribly, horribly and irretrievably mad…is it the aliens seeking human brains for snacks?  Zombies seeking to switch their brains with the brains of cats?  Monster toad-beasts? Starfish mutations?  Dr. Vic and his staff experience all of these adventures, but it is the Space Zombies’ experiments switching the thought essences of Dr. Vic’s wife Betsy and his beloved cat Ju-Jube that eventually push him over the edge.  His solution is obvious – his wife and darling pet must be combined, but first he must test his theories out on some other unsuspecting humans and cats.  What results is a truly terrifying travesty – a duel-headed cat freak that defies his master and tears out on a frightening rampage.  It is only this cataclysmic event, along with the prodding of Vic’s staff and his friends, including the very Space Zombies who helped him create the two-headed creature in the first place, that Vic finally snaps out of his maniacal trance and begins to see the light.  Only when things are put right again – when minds and bodies are matched, does Dr. Vic’s world simmer to a sane temperature again.

Completed August 2004. Shot on location in Toronto. Currently available on iTunes under “Horror”…Licensed to SPACE:  The Imagination Station and Drive-In Classics (2004 – 2007) and distributed by Hiltz-Squared Media.  First aired January 8, 2005.  Screened at the Bloor Cinema September 2004 and at the University of Toronto Film Festival in March 2005. 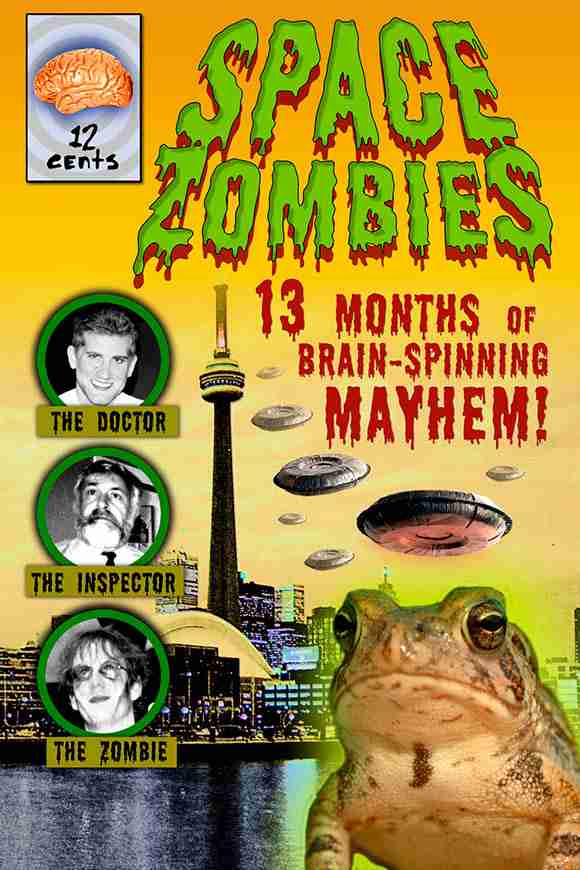 Check out one of the special features ... the Feline Stars of Space Zombies!