Regan Macaulay: Director, Co-Writer, and too many other credits in “Space Zombies…” 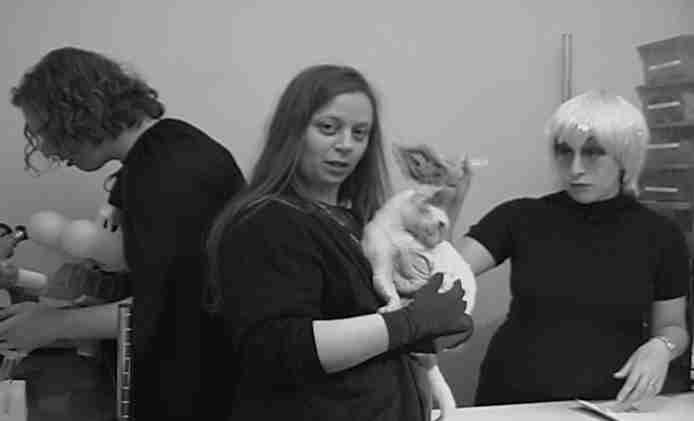 Regan Macaulay: Director, Co-Writer, and too many other credits in “Space Zombies…”

“Way too much time has gone by since Space Zombies came out.  Even more time has gone by since we actually started writing and shooting the damn thing back in the fall and winter of 2002.  It was just supposed to be one short film, but it became a trilogy of short movies after the first part, Space Zombies:  Terror from the Sky!, did so well by airing on the SPACE, SCREAM, and Drive-In Classics channels.  We took all three parts and edited them into one movie, and now, ten years later, Space Zombies is still haunting me.  It has recently gone live on iTunes (then taken down again to get closed captioning done, then went live again this past August), and Triple Take published the film script.  It became the first of five plays/scripts (soon to be seven) now published by Triple Take.  From there, I also decided to go ahead and try a novelization…or rather, a novelette adaptation of the film.  It’s not long enough to be a full novel, but all the better, I think.  It’s a short but entertaining read, just as the movie is meant to be a short and silly, but entertaining B-movie.  So, even ten years later, I’m still poking the Space Zombies corpse with a pointy stick.

Otherwise, a few other things have happened in the past ten years.  Kevin and I decided being co-writers was not enough, so we tied the knot on the Halloween that immediately followed the Space Zombies screening at the Bloor Cinema (September 2004 – hence this whole anniversary thing).  I remember that I asked Kelsey Matheson to by my maid of honour during the shooting of some Space Zombies scenes at The Cat Doctor.  Lance Serious, better known as R. J. (Rob) Downes was my best man.  Actually, most of the cast and crew were involved in the wedding – Johnny Vong and Dave Krstin were DJs, Conor McCreery was one of the videographers, Albert Masters was an usher, Kyle McKeown directed a couple of short plays that were performed during the reception (one written by Kevin’s maid of honour, Allison McWood, and the other written by Rob), and just about everyone else attended.  2004 was a year that meant a great deal to me.

Together, Kev and I have created theatre (It Was Kit by Allison McWood in 2006, where Kev played Shakespeare and I directed; Shakespeare’s Brain by Allison McWood, where Kev played Shakespeare again, and I directed again; Last Dance of the Dark Cloaked Avenger by R. J. Downes, which I co-produced and Kevin played multiple roles; The Aquarium, which I directed, and co-wrote with Allison McWood, and Kevin was our dramaturge; as well as Without Whom and Tightrope by R. J. Downes – I co-produced with Rob), and some film/TV (we worked on finishing a sketch comedy pilot, as well as continuing work with The Scary Bitch Project when it was broadcast 2003-2006 and preparing it for this new website, as well as writing screenplays together).  More recently, we’ve both focused our attention on writing both scripts and prose.  And now, a bit of publishing.  I have a picture storybook that will be published next year by Cricket Cottage Publishing (Orlando, FLA).  It’s called Beverlee Beaz the Brown Burmese, and Alex Zgud, creator of TTP’s three-headed dragon mascot, is illustrating.  I’ve had a few short stories published here and there.  Kev and I are working on a couple of picture storybooks together, too.  And I can’t seem to stop working with animals – when a dog or cat is not appearing in one of my films or one of my stories, I’m offering them massage therapy (through my business venture Kuri K9 Massage)!  And though Prea, who was in Space Zombies, is no longer with us, Frodo (feline star, Ju-Jube) is doing very well, especially for a 15 year-old gentleman!  As is Trevor, who played the Toad Beast (and he’s probably a 15 year-old gentleman, too).”

Here I am dusting Andrea Lyons and Taco! 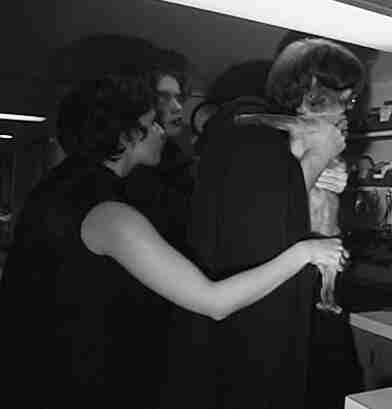 Here I am with Darcy Windover (Zombie Boy) and Conor McCreery (Zombie Lord) listening to Frodo B. Macaulay’s (Ju-Jube’s) thoughts, of course…