The novelization of “Horror at Terror Creek” will be published by Triple Take on May 16th!

The novelization of “Horror at Terror Creek” will be published by Triple Take on May 16th! 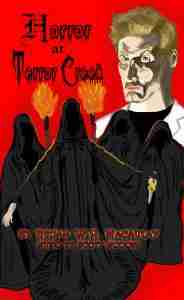 At last, the Trilogy of Horrifically Half-baked Ham is complete and the publication of Regan W. H. Macaulay’s latest novella adaptation (of her play by the same name) will be released THIS MAY 16TH!

The novelization of the play by Regan W. H. Macaulay with music by Scott McCord will be available through Lulu and Amazon!  Check back for updates and links.

Fanny Punn, grad student, is working on her thesis – a study of an antiquated town called Terror Creek.  For some reason, all the surrounding villages have failed, turning into ghost towns while Terror Creek thrives.  At the Athame Inn, Fanny meets many a peculiar character:  Ligeia, Satanic High Priestess; Dr. Audley Salmon, resident mad scientist; Raven, the mute maid; and Edgar, the bellboy who speaks like a poor man’s Poe.  Here, Fanny stumbles onto a startling secret, sealing her fate, and the fate of her friends, forevermore.

What is this Trilogy of Horrifically Half-baked Ham, you ask?  Why, it starts with Space Zombies! (the novelette adaptation of the film script by Regan W. H. Macaulay and Kevin Risk), continues with They Suck (written by both Regan T. M. Pazuzu and Kevin Risk – WARNING, this one’s explicit with comic gore and sexuality) and concludes with this latest “chapter” – Horror at Terror Creek!  Be sure to listen to a recording of the song included in Horror at Terror Creek, Christopher’s Turn, on our News page.

You’ll also be able to purchase all three books from the Trilogy of Horrifically Half-baked Ham once Horror at Terror Creek is released on the 16th.

And since the They Suck online launch party resulted in quite a wicked little script, we’ll be doing another online launch for Horror at Terror Creek on Facebook – it will be another online performance resulting in a doubtlessly kooky script to be posted on the Triple Take website, as well as Regan T. M. Pazuzu’s author website, where you can find the They Suck online launch party script.  Watch for the event page on Facebook in June!  Join us on the event page on the date of the launch (TBA) and refresh the discussion screen to watch a script/performance/party unfold before your eyes!  And participate!  You can be part of the script/performance/party!