The Toronto Irish Players present… “The Shadow of a Gunman” at the Alumnae Theatre, Toronto 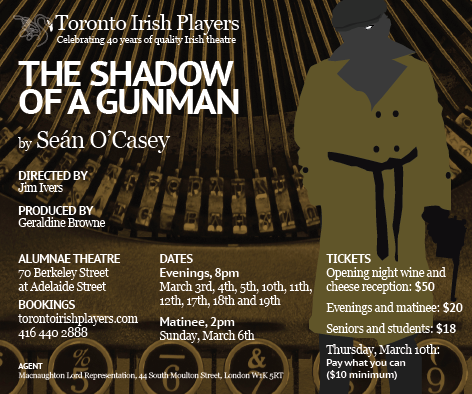 The Toronto Irish Players present… “The Shadow of a Gunman” at the Alumnae Theatre, Toronto

Regan Macaulay2016-03-06T00:00:00-05:00
By Regan Macaulay Uncategorized Comments Off on The Toronto Irish Players present… “The Shadow of a Gunman” at the Alumnae Theatre, Toronto

Come out to see our upcoming production of The Shadow of a Gunman by Sean O’Casey and directed by Jim Ivers.

The show will run from March 3rd to March 19th (at the Alumnae Theatre, Toronto) but after our sold out shows towards the end of our last production we recommend you get out early and book online!

It is 1920. Donal Davoren is a poet who has come to room with Seamus Shields in a poor, Dublin tenement slum. Many of the residents of the tenement mistake Donal for an IRA volunteer (gunman on the run). Donal does not refute this notoriety, especially when it wins him the affection of Minnie Powell, an attractive young woman in the tenement. Meanwhile, Seamus’ business partner, Mr Maguire hides a bag full of bombs in Seamus’ apartment before participating in an ambush in which he is killed. The city is put under curfew as a result of the ambush, and Donal and Seamus do not discover the grenades until the British army arrives at the tenement. 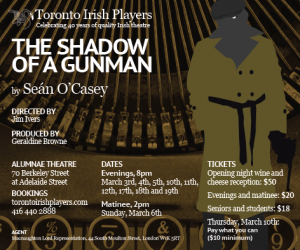